But there’s little time to rest — not when the Gators are set for a quick turnaround in Sunrise for the Orange Bowl Classic against Florida Gulf Coast, set to tip off at 5 p.m. today at the BB&T Center.

Considering the first 10 games haven’t gone according to plan, however, the Gators (6-4) should expect long, intense practices until the issues are corrected.

“I’d say we’re about where we need to be defensively. We need to continue to improve. Offensively, we’ve really struggled. I didn’t anticipate us struggling this much offensively,” White said. “I did know, obviously, we had a really tough schedule in front of us. That said, I wish we were sitting here with another win or two, and I’d feel a little better about this first segment. We’re a little bit behind.”

With ground to make up when SEC play opens Jan. 5, the Gators can’t afford to waste any opportunities to pad the resume. Although Florida Gulf Coast’s current roster is a far cry from the “Dunk City” days, White said the Eagles (5-8) have shown improvement.

“I think they’ve gotten a lot better throughout the year already, I think they’re playing much better right now than they were a month ago. I think they’ve kind of found some identity in a productive zone for them right now, they’re defending at a high level as of late compared to early on,” White said. “It’s a team with good tradition and good players, and we just watched the film with our guys again this morning. It’s got to be a lot about them of course, but a lot, equally if not more so, about us and our approach and continuing to develop.”

To say the Gators have struggled offensively this season would be an understatement. Senior Jalen Hudson has noticeably regressed this after testing the NBA draft waters, and senior KeVaughn Allen continues to battle through bouts of inconsistency. But unlike Hudson, Allen has found ways to contribute when his shot isn’t falling — Allen’s 1.9 steals per game ranks second in the SEC this season. A bright spot has been Noah Locke, who provided 18 points in Florida’s 71-63 win over Mercer on Tuesday night, earning commendations from his coach and teammates.

“He’s playing great, shooting the ball, playing defense, bringing energy. We love that from him,” forward Keith Stone said. “Most freshmen don’t come in and try to take that role, but he did it and did it very well.”

White concurred, saying Tuesday’s performance set the bar even higher for the freshman who has quickly become more than a simple sharpshooter off the bench. Unless Allen or Hudson revert to their prior forms, White will continue to test Locke and the freshmen.

“He’s really good, it was his best game. He wasn’t quite as sharp defensively as he’s been. He was terrific offensively. He’s been, over the probably the previous 5,6,7 games, really sharp defensively, so he’s been consistent there,” White said of Locke. “We’ve got to get him to where he has a great game on both sides, but I’m really pleased. He’s a freshman that’s taken minutes from some older guys. I’m sure he’s trying to maintain those minutes, but they’re up for grabs every day.”

Notes: Saturday marks Florida’s 20th overall and 13th consecutive appearance in the Orange Bowl Classic …The Gators have won 16 of their previous 19 appearances in the event, as last year’s loss vs. Clemson snapped a streak of 7 straight victories in the Orange Bowl Classic … This marks the 5th meeting between the programs and the 3rd under Mike White. The Gators have won all prior meetings, including a pair of neutral-site contests — one in the 2013 NCAA Tournament and another in Jacksonville to open the 2016-17 season … Florida is looking for its 4th win in 5 games after a 3-3 start to the season …  UF leads the SEC in scoring defense (61.9), ranks 2nd in turnover margin (+4.7) and sits at 3rd in steals (8.7). Andrew Nembhard is among the SEC leaders in assist-to-turnover ratio (2nd, 3.4) and assists per game (4th, 6.2), while KeVaughn Allen’s 1.9 steals per game rank 2nd in the SEC … Florida’s defense is ranked 8th in KenPom defensive efficiency ranking … Since giving up 81 points in the season opener at Florida State, the Gators haven’t allowed an opponent to reach 70 points and have held 2 foes under 50 … UF has held its last five major-conference opponents at least 19 points below their scoring average entering the game. 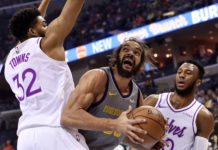 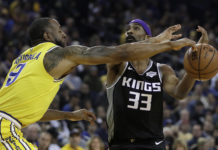 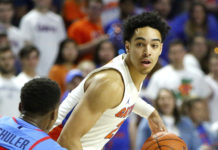