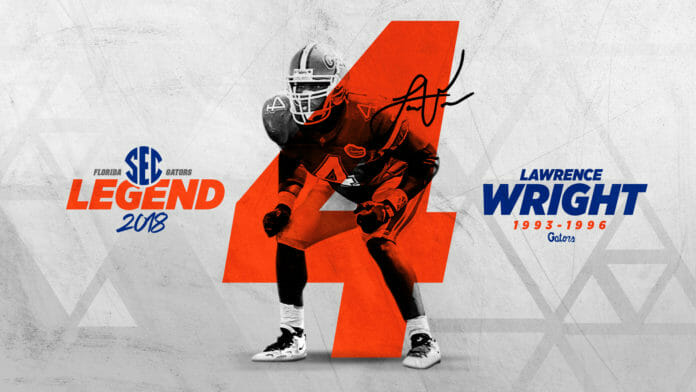 Wright was one of the shining stars of the 1996 Gators Football team that won the national championship under Steve Spurrier.  That same year, he won the Jim Thorpe Award, recognizing the best defensive back in college football.  During his senior season in 1996, Wright was one of the team captains and he finished his career with 331 tackles, five interceptions, eight forced fumbles and four fumble recoveries.  He was a first-team All-SEC selection in 1995 and 1996, named to the SEC Academic Honor Roll for four consecutive years (1993-1996), CFA Scholar-Athlete in 1996 and a second-team All-American honoree in 1995.  He graduated from Florida with a bachelor’s degree in building construction in 1997 and was inducted into the University of Florida Athletic Hall of Fame as a “Gator Great” in 2007.  He was also inducted the Georgia-Florida Hall of Fame in 2009.

Gators fans also remember Wright for leading the cheer “If you ain’t a Gator, you must be Gator bait!” during a large celebration at Florida Field following Florida’s 1996 national championship. As an alumnus, he returned to Gainesville to lead the same cheer during celebrations after the Gators’ national championships in 2006 and 2008.

The 2018 Football Legends Class includes 14 former athletes who excelled on the gridiron and helped write the rich history of the sport at their respective institutions.  This year’s class includes All-Americans, All-SEC selections and Academic All-Americans.  The group represents teams that won National and SEC Championships and are represented in state, school and college football halls of fame.

The class will be honored at the 2018 SEC Football “Weekend of Champions” Nov.30-Dec.1 in Atlanta, Ga.  The annual SEC Legends Dinner presented by AT&T will be held Fri., Nov. 30 at the Hyatt Regency in Atlanta and the group will also be recognized prior to the SEC Football Championship Game, which will be held at Mercedes-Benz Stadium on Sat., Dec. 1.

The full 2018 SEC Football Legends class is as follows:

Fact or Fiction: Gators will have a 1,000-yard rusher

Catching up with: Don Gaffney remembers first start at quarterback for Gators in 1973