Donovan Stiner didn’t have to see the play on social media — he lived it, after all — but it was seemingly unavoidable.

Each opening of social media came with a video reminder of his game-sealing sack, often with an applicable pop culture line dubbed over the play — although Stiner wasn’t getting tired of the acclaim or attention.

Far from it, in fact.

“Every time I see it on social media I watch it a couple of times,” Stiner said, “so I’d say (I’ve seen the play) over a hundred times at least.”

It was the first sack of Stiner’s collegiate career, and it came at a crucial time. On fourth down and 10 yards to go with 1:06 remaining in the contest, the Bulldogs had one final shot to pull even at home with the Gators. As quarterback Nick Fitzgerald dropped back to pass, Stiner came flying in untouched to plant Fitzgerald into the dirt. Ball game, Florida.

For Stiner, it was an opportunity he had sought since arriving in Florida’s 2017 class out of Bellaire, Texas.

Last season, Stiner saw action in all 11 of Florida’s games, primarily on special teams, where he would record nine tackles.

Yet Stiner wouldn’t have to wait long until making significant contributions in UF’s secondary. Through five games this season, Stiner has contributed on 22 tackles, although Saturday’s final sequence was arguably his most noteworthy contribution for the Gators to date.

Patience is often harped on in collegiate athletics, yet one’s patience rarely results in a decisive tackle. Meaning Stiner wasn’t going to waste the opportunity presented him.

It gave Florida and coach Dan Mullen a statement win, sure, but the Gators have no time to rest on their laurels and underestimate the incoming opposition.

Florida’s Saturday matchup with LSU has long been circled on the calendars of both fan bases, but the promising starts of both the Gators and the Tigers has turned the 3:30 p.m. bout into potentially a program-defining contest for each team.

The Tigers arrive undefeated and having handily defeated another program from the Sunshine State — Miami — in the season-opener for both programs. Florida enters with the lone loss to Kentucky, which doesn’t look nearly as bad considering the Wildcats’ undefeated mark and No. 13 ranking.

Meaning Stiner is viewing his play Saturday as a beginning rather than as a career-highlight.

“I think it’ll be a good match-up. They’re a good team, we’re a good team so it’s going to come down to whoever fights and plays harder,” Stiner said of Saturday’s contest with the Tigers.

“So far their receivers look disciplined, they look fast and their quarterback looks like he’s pretty smart.”

After holding Fitzgerald to just 98 yards through the air last week, Florida will now look to neutralize the arm of LSU quarterback Joe Burrow. The junior quarterback enters the contest having already thrown for 1,023 yards and six touchdowns this season, and UF’s secondary expects to once again be tested early and often.

“He barely turns the ball over, so he must be getting coached really good, he must be real disciplined. So we’re going to have to make him make mistakes and kind of rattle him a little bit,” Stiner said. “It’s a challenge every week in the SEC.”

Aside from affecting the SEC rankings, Saturday will also quell a long-standing argument until 2019: which program is the real “Defensive Back University” or DBU?

Stiner, who grew up as a Texan watching both programs, said the answer arrived long ago.

“We’re the real DBU,” Stiner said, “so we’re not really worried about it.” 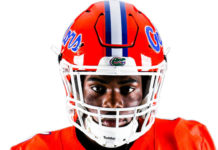 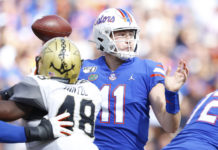