The show will go on at The Jacksonville Landing during Florida-Georgia weekend.

The city of Jacksonville issued a special events permit Wednesday for the Landing to once again be a festive gathering spot for fans, but the permit will limit the crowd to no more than 7,500 people at a time. The Landing will be able to set up outdoor bars serving alcoholic beverages, but the city’s permit limits the Landing to five of those bars.

Attendees will undergo “wanding” with metal detectors and bag searches before entering the fenced-off area at the Landing for the Florida-Georgia events.

The convergence of fans in Gator blue and Bulldog red will be the largest gathering at the Landing since an August mass shooting at a video game tournament inside the Chicago Pizza restaurant there.

The restrictions attached to the special events permit are aimed at providing a safe environment, city officials said.

“We expect full compliance with the permit conditions as they were the result of the best advice the administration received from police, fire and other public safety experts,” Brian Hughes, chief of staff for Mayor Lenny Curry, said in announcing the permit. “This entire week Mayor Curry and the administration are committed to providing the teams, fans and other visitors with the safety to come and enjoy this great game in our city.”

The Landing said it is “excited to continue as the heart of downtown Jacksonville.”

The riverfront mall will have outdoor areas with two stages for concerts from noon Friday until 2 a.m. Saturday. The celebration will resume from 11 a.m. Saturday until 2 a.m. Sunday with more music on outdoor stages. The Landing will use its Jumbotron screen in the courtyard to show the football game Saturday afternoon.

The Landing did not apply for special events permits in previous years, but in June city attorneys notified the Landing it would need to get such permits for any gathering in the outdoor portions of the Landing with crowds expected to exceed 500 people.

A lawsuit filed in state court by the Landing contends the riverfront mall is exempt from applying for special events permits. A judge could rule on that in a few weeks, but in the meantime the Landing has been applying for permits.

City officials said the Landing applied Oct. 1 for the Florida-Georgia special events permit, which was a late application because the city requires at least 90-day notice. The fate of the event was in limbo until the city decided to waive the 90-day requirement and sent a letter Oct. 19 outlining conditions for the permit, which the Landing accepted this week.

The permit for the football game weekend says the Landing expects about 10,000 attendees over the course of the celebration. The permit says no more than 7,500 people can be there at any one time. To keep track of the crowd size, the permit requires the Landing to pay for additional Jacksonville Fire and Rescue Department employees who will verify the count as attendees arrive and depart. The fire department personnel also will monitor whether the exits have enough width to handle a 7,500 person crowd.

The Landing will charge a $10 admission fee on Friday and Saturday. Children 12 and younger will be able to get in for free if accompanied by a parent.

The Landing’s own rules prohibit backpacks, coolers, chairs, outside food and drink, luggage or oversized bags, weapons and firearms, masks, fireworks, bottles and cans, and flying objects. The Landing will allow small bags such as clutches, satchels, drawstring bags, and any bags measuring less than 12 inches by 12 inches. 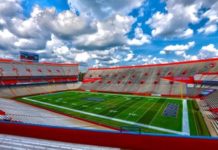