[Updated, 10-8-18, 12:05 p.m.] The deafening sound of the 90,000 fans in attendance Saturday at Ben Hill Griffin Stadium grew louder as safety Brad Stewart glided into the end zone for six, but linebacker Vosean Joseph was still looking to take things to another level.

The junior linebacker grabbed the ball from Stewart and proceeded to punt it into the stands of the south end zone, seemingly out of sheer excitement. Although it drew a 15-yard unsportsmanlike conduct penalty, Joseph only had good intentions.

With UF’s 2008 National Championship team in attendance, Joseph looked to pay homage to the man who a decade earlier had capped a dominant 30-point drubbing of the Tigers en route to bringing a title to Gainesville: linebacker Brandon Spikes.

Spikes, who is a free agent after six seasons in the NFL, had extended Florida’s lead to 40-14 with his pick-six in that contest, and Spikes proceeded to send the ball booming into the stands.

The opportunity to recreate a memorable moment was too much for Joseph to ignore.

“I just had to do it because I had seen it on Twitter,” Joseph said of his decision to punt the ball. “I was like, I’m going to boot it. I’m gonna kick it. Brad got it, so I was happy for him, but he gave it to me so I’m going to kick it.”

Joseph said he hatched his plan after being tagged on Twitter with a clip of the video, but the hardest part would be finding the ideal opportunity.

Considering Florida faced a quarterback in Joe Burrow who had yet to throw an interception — let alone a pick-six — it was unlikely Joseph would have his shot at repeating history.

Yet if that’s the play that, similar to Spikes’ in 2008, fans will remember from the game, Joseph is happy to have his name attached — but it overshadowed a career day on the field.

The junior out of Miami registered multiple career-highs against the Tigers, while also having a knack for getting in the backfield and finding the ball-carrier, maintaining his role in the defense in the process.

Joseph turned in a career-high 14 tackles, including a career-best 10 assisted tackles, and provided two of Florida’s five sacks on the afternoon. And Joseph more than doubled his tackles-for-loss in 2018, giving him 6.5 at the midway point of the season.

For a player who has been on the cusp of emergence —  and one who has often been deemed a hard hitter and not much else by uninformed observers — it was a coming out party for Joseph.

Instead of owning the moment and relishing in his performance, Joseph took the team-first road, crediting the 10 men around him with allowing him to be successful. Ultimately, it’s a mentality that has led Joseph to this point, and one that has seemingly revived the Gators in just six games under coach Dan Mullen and Co.

“I want to say my defense helped me out (tonight). They opened up probably some of the pass rush so I can get in there and get a couple sacks, bouncing it out to me so I can get on the edge. Anything the team had to do. One person can’t do it by himself,” Joseph said. “We just felt comfortable. We just went out there and played our game.”

Note: Joseph was named SEC Defensive Player of the Week, the league announced Monday after he recorded a team-high 14 tackles, including 3.5 for losses.  He also sacked LSU’s Joe Burrow twice for a loss of 14 yards.

Through six games, Joseph is the Gators’ leading tackler with 42, including 6.5 for losses.  He has also recorded three sacks, two pass breakups, one quarterback hurry and a fumble recovery, which he returned for 20 yards.

Joseph also earned the Walter Camp National Defensive Player of the Week honor for his performance against LSU. 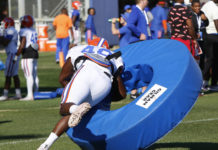