A look at some camp storylines:

Dan Mullen’s mission, if he chooses to accept it (and he has), is to identify and develop a quarterback, or quarterbacks, who can effectively and consistently run the offense and get the Gators headed back in the right direction on that side of the ball. It’s on Mullen, because he’s the QB whisperer, and this is one of the main reasons he was brought back to Florida, where he coached the school’s last elite quarterback — Tim Tebow. Based on the spring, it’s going to be a tough mission, but doable. Although there was no separation in the spring, Mullen has expressed his belief that he has the necessary talent in the QB room to make it work. Time to find out.

The players have been talking for weeks, months, that they’ve come together as a team and have developed great chemistry toiling together in Nick Savage’s demanding strength and conditioning program. Now, like a year ago, a potential major distraction has to be dealt with.

Last year, it was the credit card scandal and subsequent player suspensions.

This year, it’s the air-gun scandal and all the potential mess surrounding it.

The distraction a year ago turned out to be deflating — and season changing.

The Gators need to put this latest distraction behind them. Now. Regardless of how many players end up having to miss a game or two (or more) to start the season.

Well, maybe not head and toes, but definitely shoulders and knees.

The Gators need to get these guys back and playing at 100 percent.

At SEC Media Days two weeks ago, Jefferson said he was still rehabbing from his labrum surgery, but planned to be 100 percent by the start of the season. How much work he’ll get early in camp is probably still to be determined.

Taylor, who emerged as a playmaker at safety the second half of last season before injuring his shoulder, participated in non-contact drills in the spring. Now, is he ready to take the next crucial step and hit someone (or be hit)?

Davis and Heggie both underwent season-ending knee surgery last fall. Both Tweeted earlier this summer that they’ve been cleared. But, again, how limited, if at all, will they be.

These are four important players to keep an eye one.

This is a must, especially on defense, where there is little playing experience behind the starters at linebacker and cornerback.

Not only do the Gators need to stay healthy and on their feet at those two critical spots, they have to develop some of the young players, including some true freshmen, ready to not only play, but hold their own in the demanding SEC.

Like the quarterback mission, it’s a tough one — and a very important one.

Aug. 19: Fan Day at the Indoor Practice Facility from 2-4 p.m. Admission is free.

Tickets: Visit FloridaGators.com. Fans may also call the Gator Ticket Office at 375-4683 or visit it on the west side of Ben Hill Griffin Stadium, Monday-Friday, 8:30 a.m. to 5 p.m. 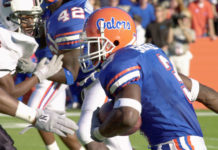 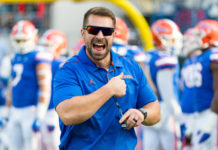