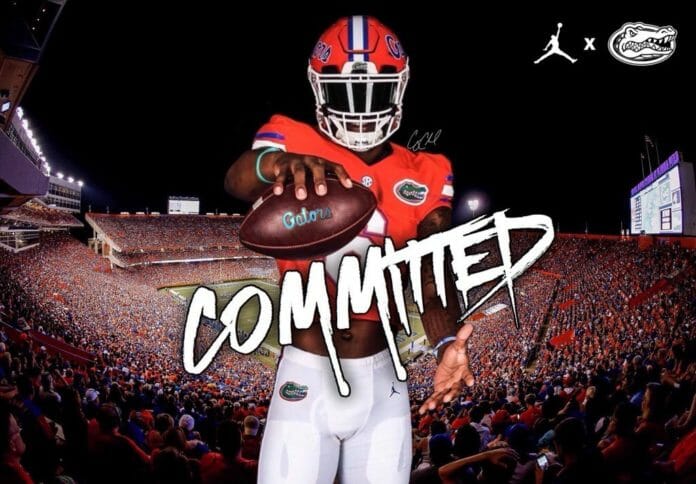 By Zach Abolverdi, Special to Gatorsports.com

The top-50 overall recruit from Forest, Miss., flipped from Ole Miss to Florida on Wednesday, announcing his decision in an exclusive interview with The Gainesville Sun.

Black is ranked the nation’s No. 3 inside linebacker and No. 22 overall recruit by 247Sports, making him Florida’s highest-rated commitment under Mullen to date.

“I’m excited, man. I love the atmosphere at Florida and this is where I want to be,” Black said. “I had a lot of fun down here and my relationship with the coaches is really good. Me and Coach Mullen go back.”

Black committed to Mullen in September 2017 when he was the head coach at Mississippi State. After Mullen left for Florida, Black backed off his MSU pledge in March and joined the Rebels’ class the following month.

However, he received an offer from UF in late January and the staff made him a top priority for the Class of 2019. Gators running back coach Greg Knox primarily recruited Black and linebackers coach Christian Robinson served as his secondary recruiter.

The 6-foot-4, 219-pounder visited Florida for the first time last week and spent four days in Gainesville. He was one of the top performers at Friday Night Lights.

“It felt amazing competing in The Swamp like that,” Black said. “I can’t wait to put on that Jordan uniform and run out the tunnel. I’m ready for that big stage.”

That stage factored into Black’s decision. Mississippi State and Ole Miss offer him proximity to home and an easier path to playing time, but he’s not looking for the latter.

“Playing football in Mississippi, I’ve always been better than everybody else I went against. Basically, it’s been too easy,” Black explained. “I really haven’t been challenged that much. I think coming here (to Florida), I’m challenging myself harder to not get what I want but earn what I want. So I can’t wait to get to work.”

With the addition of Black, the Gators now have 12 members in their 2019 class. Verbal commitments are not binding until prospects sign their letters of intent.

A look at some potential leaders for 2020 Gators