Florida coach Dan Mullen declined Friday to give any details on injured players, including true freshman wide receiver Jacob Copeland, who has missed practice all week.

Mullen said he has an idea how long Copeland will be out, but he said he will not give an injury update on any players until the end of preseason camp in two weeks. The Sun was told by several sources that Copeland suffered a knee injury that required surgery, which will keep him out for some time.

Mullen was asked Friday if he has a sense how long Copeland will be out.

“Yes I do,” he said. He would not elaborate.

“We’ll do an injury update after training camp,” he said.

In other news, Friday marked the end of finals, signaling the official start of camp Saturday. The Gators are moving into a hotel this afternoon and will practice Saturday and Sunday. The first scrimmage is Monday.

Mullen said the coaches are going to put the players in some really adverse situations over the next two weeks.

Mullen said he’s nowhere close to naming a starting quarterback, but would like to do so well before the week of the Sept. 1 opener. 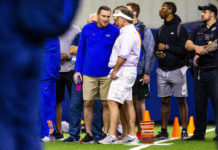