Each year, as part of its college football preview, Athlon magazine gets SEC coaches to talk anonymously about teams they will face during the 2018 season.

Here’s what an opposing coach had to say about Florida:

“Tennessee and Florida have some of the same problems. They have some good players, but they have made some mistakes — not so much from a talent perspective but from a character perspective. Player development is something they didn’t do a great job of either. But Florida doesn’t lack for talent, that’s for sure.

“I think Dan Mullen is a really good offensive coach. He was a smart recruiter at Mississippi State. He had a plan for his guys, and he put them in positions to succeed. He did a good job with the offense, developing a spread, quarterback-run offense that played to the strengths of their personnel.”

“(Defensive coordinator) Todd Grantham is really good. Mississippi State was outstanding on defense last year. They weren’t on the field for 70 or 80 plays a game, which showed that Coach Mullen wasn’t just an offensive coach trying to put up yards and points. He had a plan how to manage and win games. And that really helped them on defense.

“I don’t know if Feleipe Franks is exactly what Dan Mullen wants at the quarterback position at Florida, but I think Franks is a pretty talented dude. Big, athletic guy who can make plays with his feet and his arm. He needs to continue to develop the finer points of being an upper-level quarterback. But I’m sure Dan will do a good job with him.

“They need to identify some playmakers, but Dan will get that offense going. They will score some points.” 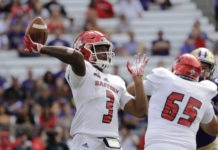