“We are so happy that Tim Walton is the head softball coach of the Florida Gators,” Stricklin said in a UF release. “Any time you have someone who does a phenomenal job you want them to know they are valued and appreciated, and that the commitment is going to be there for a long time. I think it’s good for the University of Florida for Tim Walton to be our softball coach for as long as he wants to be.”

Walton, a two-time national championship coach, recently finished his 13th season at the helm of the softball program where he led the Gators to a 56-11 record along with their ninth Women’s College World Series appearance. Since his arrival in 2006, no other program has reached the WCWS or the championship series more times than UF.

“I was told before I came here that if you win at the University of Florida, it’s the greatest place to live and work. In 13 years, we’ve demonstrated a track record here for competing for championships and treating our student-athletes and staff in a first-class manner, and now I’m being taken care for working my tail off and building this program the right way,” Walton said. “This sends a message to every recruit, to our players, to our alumni, to my family — and a statement to the softball community, as well — that we are Gators and we are going to be Gators for a long, long time. We’re thrilled to be here, thankful for the commitment, and ready to put our head down and keep on working.”

Walton’s overall body of work as a head coach, which includes three seasons at Wichita State, has led to an overall record of 845-213 (.799). He holds the highest winning percentage among active NCAA Division I softball coaches.

During his tenure with the Gators, Walton has seen unprecedented success in the Southeastern Conference and at the national level.

The five-time SEC Coach of the Year has guided UF to seven of its eight SEC Regular Season Championships, which includes winning the title the last four consecutive seasons – a feat that’s been accomplished only one other time in the league’s history. He also has been at the helm during all four SEC Tournament Championships.

On the national stage, Walton led the Gators to national championships in 2014 and 2015. The back-to-back titles put the Gators into elite company with historic programs such as UCLA and Arizona, who at the time were the only two programs to have earned national titles in consecutive years.

His teams have also broken 363 Florida records, which includes NCAA single-season records for most wins (70) and walks (360).

Walton has mentored student-athletes to reach their full potential both competitively and academically. Under his guidance, the Gators lead the nation with 40 National Fastpitch Coaches Association (NFCA) All-American honors. 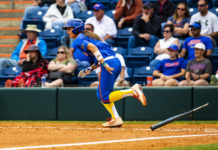 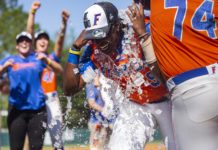 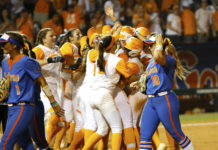