OMAHA, Neb. — Florida made a go of it, but couldn’t get out of the hole it put itself in with last Sunday’s loss in the College World Series opener.

The same can be said for Friday’s bracket final. The Gators, last year’s national champions, spotted Arkansas a 4-0 lead, made it interesting at 4-2 before being eliminated with the 5-2 loss.

Florida, which ousted Texas and Texas Tech in elimination games this week, sees its season end with a 49-21 record. Florida lost for the first time in eight NCAA elimination games. The Gators were looking to get to the finals for the fourth time since 2005.

Arkansas (47-19) advances to the CWS championship series Monday with a 3-0 record here. The Razorbacks allowed only three hits and had control of the game from the start.

Florida’s loss means the NCAA Tournament’s No. 1 overall seed has fallen short of winning the national championship every year since 1999 — the first year of the current format when Miami won the College World Series.

“I don’t know there’s a whole lot of separation between the 1 seed and the 8 seed,” UF coach Kevin O’Sullivan said. “When these seeds come out, that was almost a month ago. If Auburn was sitting here and they had won our super regional, they would have had just as good a chance to win it as us. This game is very fickle. It can change game to game and week to week. The seeds are really irrelevant when you get to this point.”

Arkansas got to Brady Singer (12-3) quickly, scoring on a two-out single by Luke Bonfield after Casey Martin had reached on a single in the first inning.

Dominic Fletcher drove in Martin, who had singled and moved to second on an error by Blake Reese at second base, with a single for a 2-0 Arkansas lead in the third.

The Razorbacks’ lead grew to 4-0 in the fifth after Martin doubled and later scored on a groundout by Bonfield. Fletcher followed with his 10th home run of the season.

Florida finally broke through against Arkansas starter Isaiah Campbell (5-6) for two runs after two outs to cut the deficit to 4-2. Until then, Campbell was pitching a perfect game with six strikeouts.

“Yeah, he was a lot better than I thought,” O’Sullivan said of Campbell. “He had a perfect game through four. Once we got him into the stretch, he lost some command. He was certainly a different pitcher than we saw in Gainesville. He was 94-96 (mph) pounding the outer half of the zone and threw enough off-speed to keep us off his fastball.”

Austin Langworthy started the frame for Florida with a single before Reese was hit by a pitch. Brady Smith then hit an RBI single and Reese scored on a wild pitch.

Singer, the No. 18 overall draft pick by the Kansas City Royals, took both of Florida’s losses in the CWS and was beaten for the second time this season by Arkansas. The four earned runs against Singer were the most he’s allowed since Arkansas got to him for six on March 23 in what was his first loss of the season.

“I think they’re ultra-aggressive,” Singer said. “I threw some pitches, but they capitalized on the bad ones. That’s what a good hitting team does. I could have obviously made some better pitches.”

Arkansas regained momentum in the sixth off UF’s Tommy Mace. Jared Gates singled, moved to third on the Gators’ fifth error of the CWS and later scored on Martin’s run-scoring infield single for a 5-2 lead.

Campbell more than atoned for his worst performance of the season when he faced the Gators in the teams’ Southeastern Conference opening series in March. He was at his best this time, matching his career high with eight strikeouts and leaving with a 5-2 lead. Razorback relievers Jake Reindl and Matt Cronin kept the Gators scoreless the rest of the way.

Campbell’s outing was in stark contrast to his outing at Florida on March 24. That night, the 24th-round pick of the Los Angeles Angels lasted one inning and was rocked for six runs in a game the Razorbacks lost 17-2.

Arkansas will play the winner of the Mississippi State and Oregon State game in Saturday’s other bracket finale. Arkansas has never gone to the CWS finals since the NCAA Tournament went to its current structure in 1999. The Razorbacks were runner-up in 1979 in their only appearance in a championship game.

“We fought all the way to the end,” O’Sullivan said. “This is probably the — well, it’s not probably, it is the best four-year run in our school history.

“And, unfortunately, there’s only one team that’s going to move on, and that’s Arkansas from our bracket. But I couldn’t be more proud of our team. It was obviously the disappointment on their faces when the last out was made, it was not easy. But awfully proud of the way they played this year, their careers, and I know there’s a lot of disappointment right now.

“But we’ve got a lot of good players coming back. Good recruiting class. And we’ve created something really special here at Florida. And the next couple days will not be easy, but certainly proud of them, the way they handled themselves both on and off the field. It obviously goes a lot deeper than wins or losses. But it’s just disappointing right now.”

Notes: The Razorbacks won three of five meetings with the Gators this season, including the last two. … Singer finishes his UF career with a 23-10 record, including a pair of CWS victories in 2017 to help the Gators win their first national title. … UF senior captain JJ Schwarz set a school record with 266 career games played. 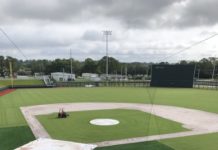