The Gators took a 2-0 lead in the third inning. Blake Reese doubled and scored on Deacon Liput’s single after one out. Nelson Maldonado then singled to move Liput to second. A walk to Jonathan India loaded the bases for JJ Schwarz, who hit a sacrifice fly to score Liput.

Austin Langworthy hit his first home run of the season to put UF up 3-0 in the sixth inning.

Mace went 6.1 innings, his longest outing of the season, scattered three hits, struck out five, didn’t issue a walk and allowed one earn run in his first SEC start.

“In the grand scheme of things, he threw outstanding, even more than I thought,” UF coach Kevin O’Sullivan said. “I probably could have left him in there in the seventh, but I was really trying to be careful about him coming away feeling good about himself because we’ll really need him down the stretch.

“He gave up three hits over 6.1 and I thought he was outstanding and that’s exactly what we needed. That’s kind of what we got last year from Tyler Dyson, it was a shot in the arm down the stretch.”

Jordan Butler relieved Mace after a single in the seventh inning. Elijah MacNamee greeted Butler with a two-run home run to cut the Bulldogs’ deficit to 3-2.

After a walk in the eighth inning, Michael Byrne (2-1) relieved Butler, who allowed two runs in his .2 innings. A Bulldog then reached on a throwing error by Schwarz off a bunt attempt. Jake Mangum drilled a two-run triple to give MSU its first lead at 4-3. Tanner Allen followed with a two-run home run for a 6-3 lead.

Riley Self (3-0) picked up the win in relief. He didn’t allow a hit in 2.2 innings and struck out three.

The teams play again at 7 p.m. Friday, with ESPNU providing the coverage.

Note: Thursday was just the third loss by the UF bullpen all season. They now have an 11-3 record with 15 saves. 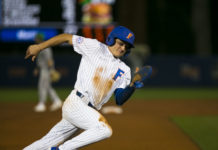 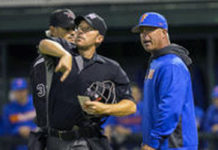