“It’s a great accomplishment for all the great players we have had in our program,” UF coach Tim Walton said. “We recruit some great ones.

“Preparation and at times it comes down to will. The players have a buy in on who they are. Be consistent. The focus has been on our strength and weaknesses.”

The Gators stretched their advantage to 4-1 with two runs in the sixth on solo home runs from Kvistad and Janell Wheaton.

Missouri hit a solo homer in the sixth to settle the final margin at 4-2.

The Gators are only the second program in conference history to have captured four consecutive regular season titles. LSU accomplished the feat with championships in 1999, 2000, 2001 and 2002.

“It says a lot about the way they prepare, how they take care of each other and just how consistent we’ve played all season long,” Walton said. “It was a happy moment for me to watch our players celebrate after we won to clinch the regular season championship.”

Florida goes for the series win at 3 p.m. today. The game will be air on the SEC Network. 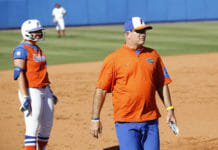