The Gators’ pummeled last-place Butler in Big East Conference action before a Donald R. Dizney Stadium crowd of 415, scoring the first 15 goals of the game en route to a 23-3 runaway win.

UF, which set a season-high for points scored and margin of victory, improved to 14-3 overall and 9-0 in conference play while the Bulldogs, just in their second year of existence, fell to 1-15, 0-9.

“Obviously we are very excited to win the Big East regular season title,” coach Amanda O’Leary said. “It was one of this team’s goals from day one, so being able to accomplish that goal says a lot about this team’s fight and work ethic.”

UF came out focused, reeling off 10 unanswered goals in the first 7:30 of the match to bring on a running clock for the remainder of the afternoon.

Pirreca’s third and final goal came with 19:48 left in the opening half, giving her 200 career points.

She is just the sixth Gator to reach that lofty plateau.

“It was an emotional day for all of us with it being Senior Day,” Pirreca said. “Our mentality going into the game was to have fun and appreciate each other. We are trying to appreciate every game we have left playing with one another.”

Next up, UF will host the Big East Tournament.

The Gators clinched the No. 1 seed while runner-up Georgetown also clinched, but the third and fourth seeds will depend on the outcomes of Saturday’s games.

The semifinals are Thursday, with the two winners meeting for the tournament title Saturday at noon.

“It is certainly nice to be able to host,” O’Leary said. “Playing in front of our home fans is something we look forward to. It provides our team with a lot of momentum. It’s upbeat and our fans are great, so to be able to play in front of them is going to be a special time for all of us.

“It certainly is very nice not to have to travel, that’s for darn sure.” 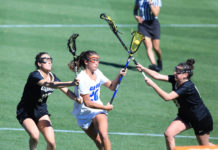