The Florida softball recorded the program’s second perfect game of the season in an 18-0 win Firday over Hampton at Katie Seashole Pressly Stadium. The Gators’ second game of the day, against Jacksonville, was halted with one out in the top of the fifth inning tied 1-1.

The Gators (29-4) and Dolphins will resume play after the 1 p.m. contest between Florida and Hampton (13-15). UF and JU will follow the resumption of the halted game with regularly scheduled game that is supposed to tentatively start at 3:30 p.m.

In the win over Hampton on Friday morning, Aleshia Ocasio (13-2) combined with Natalie Lugo to throw only the second combined perfect game in Florida history. The duo needed just 59 pitches and tallied seven strikeouts in the effort.

The Gators put the game away in the first inning with three three-run home runs by Kayli Kvistad, Jaimie Hoover and Nicole DeWitt. Later, Hannah Adams hit a two-run home run and Jordan Matthews a three-run shot for UF.

Men’s tennis: At Winston-Salem, N.C., No. 10 Florida knocked off No. 1 Wake Forest 4-3 to improve to 13-6 on the season. The Gators won the doubles point behind the play of McClain Kessler-Duarte Vale at No. 2 and Chase Perez-Blanco-Oliver Crawford at No. 3. Then, UF picked up singles wins from Crawford at No. 3, Vale at No. 5 and Kessler at No. 6 to beat the Demon Deacons (15-2).

Women’s tennis: Florida shrugged off dropping the doubles point and made quick work on the singles court when the Gators defeated Arkansas, 4-1, at Linder Stadium at the Ring Tennis Complex on Thursday evening.

The Gators (13-5 overall) had their chances to claim the doubles point for the early lead, however, it wouldn’t matter with Katie Kubicz, Peggy Porter, Anna Danilina and McCartney Kessler each netting straight set singles wins to secure Florida’s fourth consecutive victory and more importantly improve to 8-1 in the SEC. Arkansas fell to 5-12, 1-7. 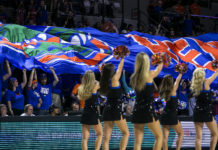