The game started nearly two hours late, but Gator baseball fans probably didn’t care about the rain. Or the wait.

Brady Singer was worth it.

A week after a subpar performance against Arkansas, Florida’s Friday night starter was simply splendid, striking out a season-high 11 and allowing one run, as No. 2 Florida defeated eighth-ranked Vanderbilt 8-4 before a crowd of 3,781 at McKethan Stadium.

Singer’s only blemish? A leadoff home run that cut Florida’s 2-0, seventh-inning lead in half. Vanderbilt had just one other hit and three baserunners to that point.

“He had a special fastball tonight,” UF coach Kevin O’Sullivan said of Singer. “He’s usually down in the zone, but he had some riding action to his fastball and was getting lots of swings and misses. Any time you strike out 11 in our league, that’s a great night.”

Florida’s defense backed Singer nicely with two memorable plays, a marvelous stab and throw from third to first in the fourth inning; and a running catch in right field in the sixth. UF had just one error, a harmless flub in the ninth.

Up 2-1 late, Florida (23-5 overall, 5-2 in the SEC) took control in the bottom of the seventh with Deacon Liput’s RBI double, Nelson Maldonado’s RBI single and Jonathan India’s two-run home run to ensure a 7-1 lead. All three hits came with one out.

The pivotal homer was India’s 10th of the season and the sixth during his 13-game hitting streak. He finished the night with a team-high three hits.

“I’m not trying to hit home runs,” India said. “I just put a good swing on the ball.”

Vanderbilt (17-9, 5-2) trailed 7-1, but added a bit of drama with a three-run home run in the eighth from Stephen Scott.  In came closer Michael Byrne, who retired consecutive batters to end the inning and provide the foundation for his school-record 26th save, surpassing John Pricher (1988-92).

“Vintage Michael, ends up breaking the record,” O’Sullivan said. “He comes in, gets two outs in the eighth on four pitches. That’s what he does. He’s got no pulse. I don’t know how to explain it. Michael was Michael again.”

Vanderbilt starter Drake Fellows (4-1) nearly matched Singer pitch for pitch early during a matchup of two of the Southeastern Conference’s premier programs, but Florida struck first in the fourth when India dropped down a leadoff bunt single to extend his hitting streak. Wil Dalton followed with a single. A wild pitch put runners on second and third when JJ Schwarz’s deep fly to right scored India. Austin Langworthy walked, but Fellows rebounded with a strikeout and a fly-out to limit the damage to one run.

“We got off to a little bit of a rough start offensively,” O’Sullivan said. “Fellows was throwing the ball well. He had given up fifteen walks in thirty-three innings. He was locating his breaking ball early in the count. It got started with the bunt by India. That was on his own. That shows you what type of player he is.”

The Gators tallied their second run in the fifth. With one out, Liput reached on an error, moved to third on Maldonado’s double and scored on a wild pitch. India and Dalton struck out, leaving Maldonado on third.

Neither team generated much offense early. Florida’s Blake Reese produced the first hit of the game, a second-inning single that skidded through the right side of the infield. Langworthy, who had walked with two outs, reached third. However, the scoring threat ended when Keenan Bell was retired on an infield popup.

Vanderbilt had the game’s first extra-base hit, a leadoff double by Julian Infante. Infante moved to third on a groundout, but Singer, who struck out six through the first three innings, stymied the Commodores with consecutive punch-outs. 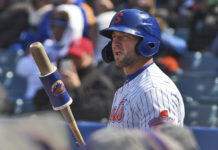 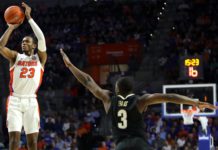 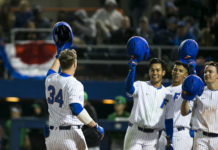 Gators move up two spots to No. 2