Wizards guard Bradley Beal is averaging a league-leading 37.9 minutes per game since the injury to point guard John Wall 16 games ago, tied for most in the NBA with fellow all-stars Lebron James and Anthony Davis. Beal is one of two players on the Wizards to play in all 64 games this season and averages 2.55 miles ran per game which is eighth highest in the NBA. Since Wall’s injury that 2.55 miles per game has increased to 2.66. Real Deal Beal even he admitted he was tired after the Indiana game this week when he played 43 minutes in a 98-95 loss to the Pacers.
“It’s no excuse, man. I got to hit them shots. It’s just plain and simple,” Beal mumbled in a deep tenor. “I was tired, but you can’t half-ass carry a team. You got to go all out.”
During Washington’s three-game skid, Beal is 19-for-63 (30.2 percent from the floor), well off his 45.7-percent season average. Beal did start off the week well, making an assist for a dunk then hitting a 3-point dagger in the final two minutes of the Wizards’ road win at Milwaukee Tuesday night. But Washington had to come home Wednesday to host Golden State, which held Beal scoreless in the first half and finished with just eight points in the loss. Beal played the role of facilitator against Indiana on Sunday, dishing out 11 assists (a career-high), but missed his last five shots down the stretch and committed two crucial turnovers in the closing minutes of the loss.

Congratulations to @RealDealBeal23 on a career-high 11 assists 👏 pic.twitter.com/j3CFlcuz0B

Estranged Knicks center Joakim Noah appears to have played his last basketball this season after the March 1 deadline passed and the Knicks still have yet to waive the 33-year old. The next date that makes sense for the Knicks and Noah to part ways will come September 1 when New York will stand to save around $12 million in the summer of 2019, when the Knicks are reportedly planning to do some free-agent shopping.
Celtics center Al Horford scored in double digits for just the second time since the All-Star break in Boston’s 123-120 loss to Houston on Saturday. The Celtics have struggled to beat playoff-caliber teams as their last win against a would-be playoff team came on February 8 against Washington in overtime.
Newly acquired Thunder forward Corey Brewer played 12 minutes in his debut for OKC, playing right around his season average of 12.8 minutes per game. Brewer failed to score but did have two steals, one rebound and one assist in the Thunder’s 108-100 loss to Portland.
The Mavericks will have a three-day gap after their game tonight against the Nuggets, and coach Rick Carlisle said he’s going to use the three days to evaluate forward Dorian Finney-Smith further to see if he’s ready for game action.
Grizzlies forward Chandler Parsons played just 13 minutes and scored four points in his first game since Valentine’s Day and only his second time seeing game action in 2018. 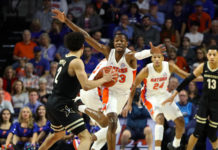 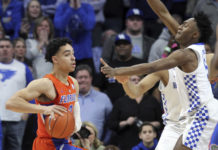