Dan Mullen has been clear that his offense is going to be built around the skill set of his quarterback. So, before we know what the offense is going to look like, we have to find out who the quarterback is. That’s a big part of what this spring is about, possibly finding the best QB and then start fitting the offense around him. Going into the spring, the competition is wide open among four scholarship quarterbacks — Feleipe Franks, last year’s starter, Kyle Trask, redshirt freshman Jake Allen and true freshman and early enrollee Emory Jones. Franks has a considerable edge in experience, but other than that, the four QBs are starting from the same spot in an offense that’s new to them. Franks is a big, strong guy who said earlier this week that he’ll run the ball if he’s asked, but it’s clear that his strength is his arm. Trask and Allen are also pretty much pro-style QBs who are athletic enough to make some plays with their legs. Only weeks out of high school, Jones clearly is making a big step up in competition, but what he has going for him is he is a true dual-threat quarterback who seems to fit the Mullen mode. The way this battle goes depends on how quickly the four QBs learn the offense and how comfortable they feel in it.

The big question here is how much (if any) a year off has affected Jordan Scarlett’s game. Before he was suspended the week before last season’s opener, Scarlett appeared primed for a breakout year after becoming the starter in 2016 and leading the Gators in rushing. If he regains that form, he’s probably the guy to beat for the starting role. Either way, he’s going to get pushed by Lamical Perine and Adarius Lemons, who also are getting a fresh start with a new coaching staff and a new offense. With Malik Davis out for the spring, two talented true freshmen — Iverson Clement and Dameon Pierce — should get plenty of reps and will have a chance to show the coaches what they can do.

The competition here should be really interesting with the addition of the two transfers — Van Jefferson (Ole Miss) and Trevon Grimes (Ohio State). Jefferson is a proven and productive wide receiver in the SEC and he very well could turn out to be UF’s No. 1 target in the passing game in the fall (if he’s eligible). Grimes also has a chance to have an impact (if he’s also eligible) early. He was one of the country’s highest-rated wide receivers coming out of high school (Fort Lauderdale St. Thomas) a year ago and has the size and speed to become a playmaker. The Gators also have some experienced receivers — Tyrie Cleveland, Dre Massey and Kadarius Toney — who have flashed big-play ability and will be looking to elevate their game under the new coaching staff. Redshirt freshman Daquon Green and redshirt sophomore Rick Wells will have a chance to work their way into the playing rotation.

Like the quarterback position, this one is wide open going into the spring. Senior C’yontai Lewis has all kinds of experience, but little in the way of stats to go with it. At times, though, he has shown playmaking ability as a receiver. He will battle Moral Stephens and redshirt freshman Kemore Gamble for the starting role. Tight end is a pivotal position in Mullen’s offense, so this will be an important competition. It looked like Gamble would have a chance to emerge as a true freshman in 2017 before a foot injury derailed his season. It will be interesting to see what strides he’s made in the year he’s been here.

Kylan Johnson, David Reese and Jeremiah Moon would appear set as the probable starters. What’s going to be intriguing is the play of the young, untested linebackers — Nick Smith, James Houston and Ventrell Miller — and how many ends wind up playing a dual role as an outside linebacker. We already know that Cece Jefferson is going to take on that hybrid role. Mullen mentioned earlier this week that Jachai Polite and Jabari Zuniga also could end up playing that position. Jefferson, Polite and Zuniga could provide much-needed depth and playmaking ability to the linebacker group. Here’s another thing to look for: safeties moving close to the line of scrimmage and playing like linebackers. 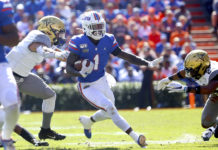