Florida’s series-clinching victory Sunday over Texas A&M was a seemingly routine one, and further exemplified Florida’s dominance on the diamond in 2018.

A one-hit performance on the mound from Aleshia Ocasio and home runs in the first inning from Nicole DeWitt and Hannah Adams paced the No. 6-ranked Gators softball team to a 10-0 victory in five innings against No. 8-ranked Texas A&M on Sunday night at Katie Seashole Pressly Stadium.

“My bullpen was very good before the game, so I knew I was going to come out here and have my best stuff,” Ocasio said. “We showed up offensively, and it’s always great to have some insurance runs.”

Ocasio (11-2) made quick work of the opposition in the top of the inning, retiring all three batters in order. Meanwhile, Aggies starting pitcher Kayla Poynter lasted just 29 pitches across a pair of outs as Florida had little trouble making significant contact from the opening pitch.

DeWitt’s two-run home run landed well over the wall in center field, and Adams’ three-run blast, the first collegiate home run for the freshman Adams, put Florida firmly in the driver’s seat. After coming across the plate once again in the second inning, DeWitt was inches shy of having a second home run in the decisive third inning stretch.

Her shot to left field was inches short of sailing over the way but the ball was thwarted by the padding on the wall, instead coming to rest past the extended glove of Aggies left-fielder Keeli Milligan.

“She had the same thing happen this year, the same exact top spot. I’ve never seen it, ever,” UF coach Tim Walton said. “We’re going to have to shave the top off our wall to get around it. It’s bizarre.”

DeWitt and the Gators (26-3, 6-2 SEC) settled for a three-run RBI double, giving Florida a 9-0 cushion and putting Texas A&M in danger of being run-ruled. An RBI ground out from Amanda Lorenz in the fourth inning would score Haven Sampson and cap the scoring barrage.

The Gators and Aggies (29-6, 3-2 SEC) return to the diamond Monday at 7 p.m. where Florida will look to secure the sweep.

“I think two days in a row, we really limited a really high-powered offense,” Walton said. “I thought our pitchers set the tone to come out and have two really good first innings.” 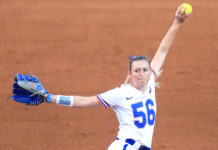 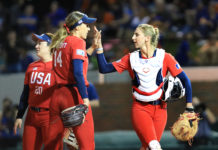 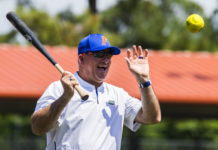