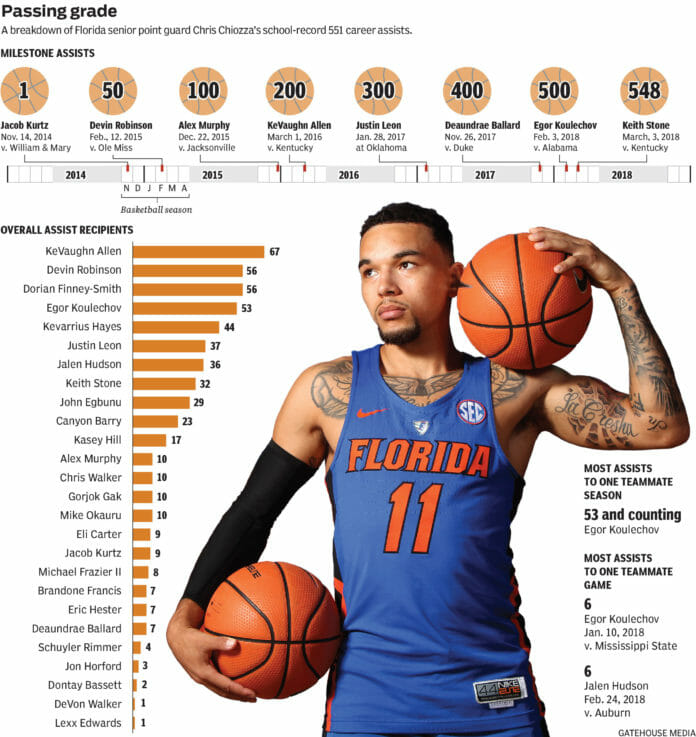 When Florida senior point guard Chris Chiozza dished his school-record 548th career assist on Saturday against Kentucky (surpassing Erving Walker’s record), it was the culmination of a masterful four years for the flashy passer from Memphis.

Along the way, Chiozza learned he didn’t always have to make home run plays. Singles were fine.

Now at 551 career assists and counting, Chiozza is looking to provide more postseason magic for the Gators when they open SEC Tournament play in St. Louis on Friday. Chiozza’s family will be in the stands, like they were when he broke the assist record on his Senior Day on Saturday.

Asked what the record says about him, Chiozza said: “That I’m unselfish. I don’t care about scoring. I’d rather get assists rather than score, so I think that speaks a lot.”

Chiozza recalled his first UF assist in his freshman debut against William & Mary, an alley-oop that former UF walk-on Jacob Kurtz caught in the air and banked home. Chiozza has dished the most of his 551 assists, 67, to current teammate KeVaughn Allen. He’s assisted on baskets for 26 different UF players, ranging from Allen and former teammate Devin Robinson to walk-ons Schuyler Rimmer and Lexx Edwards.

This season, Chiozza has developed a strong rapport with fellow senior guard Egor Koulechov. Chiozza has assisted on 55 baskets for the 6-foot-5, Rice grad transfer. The 55 assists, and counting, are the most Chiozza has dished to one teammate in a season.

“We clicked pretty fast,” Koulechov said. “He puts it on target every single time. We trust him to make the right plays on offense and have a couple of turnovers, but the beautiful thing about him is composure. It’s always the same whether he turns it over or makes a great play.”

Turnovers are rare for Chiozza, who leads the SEC in assist-to-turnover ratio at 3.3-1. As for what makes Chiozza a special passer, “He has elite speed and quickness,” Florida coach Mike White said. “So you have to give him a little bit of space. I think he’s got really good vision, but most importantly to me — what separates him and makes him such a great passer — is he’s a split-second thinker. I haven’t thought about this and haven’t asked the guys this, but I’m sure he’s the best on the team at video games. He just sees stuff so quickly. Sometimes he sees it and that pass is halfway to a guy and you’re over there on the sideline before you even saw the guy was open. He’s just a really, really quick thinker.”

Asked about his video-game prowess, Chiozza responded: “Certain games. Spidey (Florida center Kevarrius Hayes) is really good at video games. He remembers all of the moves in fighting games and stuff, so it’s kind of hard to beat him. I think I’m the best Fortnite player now. I’ve got a couple wins now, so I feel good about that. And every other game I’m pretty good at.”