The duo of Barnhill and Ocasio held the Ragin’ Cajuns (6-2) scoreless and limited the potent offense to just six hits through 13 innings.

In the first game of the day it took six innings before the Gators broke onto the scoreboard, but there were plenty of opportunities for both teams. The Gators broke open the scoring in the sixth and took a 2-0 lead over the Ragin’ Cajuns on Nicole DeWitt’s two-run home run.

Florida didn’t stop there as Janell Wheaton turned on a 1-2 pitch that quickly went over the wall down the left-field line for a two-run home run.

The 4-0 lead is all the cushion pitcher Kelly Barnhill needed to secure the two-hit complete-game shutout in the first game.

The Gators wasted no time in game two to put runs on the board.

Florida engineered four runs on a pair of hits and an error in the top of the first inning. Jordan Roberts started the scoring with her two-RBI single. An RBI fielder’s choice and a Ragin’ Cajun error resulted in two more runs before Louisiana got out of the inning.

DeWitt struck again with her second home run of the day. The two-run shot over the wall in right center pushed the Gators lead out to 6-0 over the Ragin’ Cajuns.

The Gators and the Ragin’ Cajuns will conclude the series at 2 p.m. today.

SEC swimming and diving championships: At College Station, Texas, the Gators earned two medals on the fourth day of the championships, including Olympic champion Caeleb Dressel’s gold in the 100 breast, his second individual event win of the meet.

After the fourth day of competition, the UF men sit first with 876 points, while the women are holding steady at eighth with 429.5 points over the course of the meet.

Dressel once again outdid himself, setting a new American and NCAA record to win the 100 breast championship final. His time of 50.03 is an A-cut and surpassed the SEC meet and UF program records that he broke in the preliminary. Dressel now holds five American records: 50 free, 100 free, 100 fly, 200 IM and 100 breast.

On Friday, it was a night of firsts for the two Florida swimmers, with both Jan Switkowski and Khader Baqlah earning their first individual SEC title. Switkowski earned his first individual SEC Championship in the 100 fly with a career-best A-cut time of 45.26. With 50 yards to go, Switkowski sat in fourth place, but turned it up to another level in the final 50 for the come from behind victory.

The Gators’ other title of the night came in the 200 free, with Baqlah recording the fastest time in the nation with a 1:31.96. Maxime Rooney, the reigning champion in the 200 free, finished just behind Baqlah, giving the Gators the 1-2 punch. Rooney’s time of 1:32.97 was a B-cut.

Men’s golf: After 36 holes of the 41st SunTrust Gator Invitational, Florida sits in second place just one stroke back of Vanderbilt. The Gators were paced by four players in the top 25, including Gordon Neale and and Alejandro Tosti, who both finished inside of the top 10 on the leaderboard at Mark Bostick Golf Course.

Neale, Florida’s No. 1 this weekend, was 2-under entering the final two holes. He birdied the 17th. After his drive on the 18th, Neale had 120 yards to the pin. He struck it perfectly and holed it out for an eagle to close out the second round of the Gator Invitational.

He sits at 4-under par in third just two back of the leader Claudio Correa. Tosti is one stroke behind Neale at 2-under and in a tie for 10th on the leaderboard. Tosti recorded the Gators other eagle on the day carding a two on No. 14 in round one.

“It is such a great opportunity. Vanderbilt is some great competition and UCF has had a really competitive team. To be able to compete against them on our home course, those are the opportunities that you want, practice and work hard for. We just have to go and do what we do best which is go out and be play patient and discipline. We have to go be clutch,” UF coach J.C. Deacon said.

Women’s basketball: The Gators (10-16, 2-11 SEC) play host to Vanderbilt (6-21, 2-11 SEC) at the O’Connell Center with tip-off scheduled for 1 p.m. today. It’s Senior Day, as UF will recognize Gabby Seiler, Paulina Hersler, Dyandria Anderson and Haley Lorenzen for their contributions to the program during a pregame ceremony.

Men’s tennis: At Seattle, 11th-ranked Florida (5-3) regrouped on day two of the ITA Indoor Championship to defeat No. 22 Notre Dame 4-3. All four Gator victories came in singles. Florida will take on No. 10 Illinois at noon today. 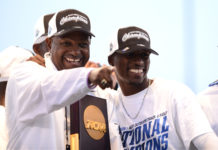