It’s come down to this — a three-game season for the Florida Gators to determine if they are NCAA Tournament worthy or NIT bound.

Florida completed its two-game swing to the Volunteer State with a pair of losses at Vanderbilt and at No. 19 Tennessee. The Gators (17-11, 8-7 SEC) will play two of their final three regular-season games at home, beginning Saturday night against SEC-leading No. 12 Auburn.

After Auburn. Florida plays Tuesday at Alabama, then closes the regular season on March 2 at home against Kentucky.

In many recent seasons, playing two of the final three games at home would serve as an advantage for UF. But the O’Connell Center has been far from a house of horrors for  Gator foes this season. Florida is 10-5 at home this season, which has included losses to Georgia, South Carolina and Loyola Chicago.

Effort-wise, Florida played well enough to pull off an upset Wednesday at Tennessee, but lost 62-57 to the Vols despite outrebounding them 38-36 and outscoring them 16-4 in second-chance points. UF has lost six of its last eight SEC games.

“I just talked to our guys about the fact that I don’t think we’ve played that hard in one home game this season,” Florida coach Mike White said. “And that boggles my mind. I have no idea why. But I told them on Saturday if we play hard and we clean up some mistakes, we’ll have a chance. If not we’ll keep seeing a very inconsistent team.

“I don’t know why we’re different when we’re away from home. I don’t understand it.”

A new issue that has popped up during UF’s three-game losing streak is free-throw shooting. The Gators led the SEC in free-throw percentage in mid-January, but are shooting just 59.3 percent from the foul line (32-54) over their last three games.

“In practice, we’re pretty good about making them,” Florida junior center Kevarrius Hayes said. “When it comes to game time, we’ve got to learn to translate that. I feel like once we get all parts figured out, we’ll be back to being a great team.”

“I missed two tonight and I think I missed my last four free throws,” Chiozza said. “I don’t know, we work on them every day. We shoot them well in practice. I know I had two go in and out today. They feel good, but it’s just something we’ve got to take more time at the line, maybe, focusing the same way we do in practice.”

FREE THROWS: With nine assists against Tennessee, Chiozza passed Kasey Hill for second on UF’s all-time assist list. At 531 career assists, Chiozza is 16 shy of passing Erving Walker to become UF’s assist king. … The loss to Tennessee dropped Florida to 4-2 on the season against ranked teams. It also dropped Florida to 2-6 in games decided by five points this season. White is 11-17 in his UF tenure in games decided by five points or less. … Freshman center Isaiah Stokes and freshman forward Chase Johnson both traveled to Tennessee with the UF squad but did not play. 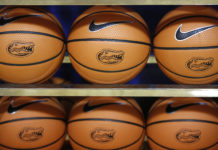