Florida split its final dual swim meet of the season Friday at Tennessee.

Jan Switkowski, Mark Szaranek and Michael Taylor each contributed two wins apiece for the Gators. Switkowski and Szaranek swept the butterfly events with B-cut times, with Switkowski swimming a 47.08 in the 100 fly and Szaranek recording a time of 1:45.53 in the 200 fly. Both men were also on the winning 400 free relay team that recorded a time of 2:56.01.

Taylor’s victories came from a sweep of the backstroke events. Ben Lawless (1000 free), Marco Guarente (200 breast) and Maxime Rooney (400 free relay) round out the wins by the Gator men.

Florida is back in action on Feb. 2-4 at the Auburn Invitational.

Tennis: The UF men are back at home this weekend to host the 10th Intercollegiate Tennis Association Kick-Off Weekend today and Sunday at the Alfred A. Ring Tennis Complex. The Gators will take on South Alabama at 3 p.m. today followed by a matchup Sunday against either South Florida or Pepperdine.

The reigning national champion UF women, ranked No. 3 to open the season, play Cal State Fullerton at 9 a.m. today, followed by Louisiana-Monroe vs. Marshall at noon, UF-USA at 3 p.m. and South Florida vs. Pepperdone at 6 p.m.

The Gators enter the weekend tournament looking to secure a place in next month’s ITA Indoor National Championships in Seattle. Florida is one of 15 regional sites on both the men’s and women’s side, with four teams competing in the region. Host sites for the ITA Kick-Off Weekend were determined using the final 2016-17 Oracle/ITA Collegiate Tennis Rankings. A draft was held to fill the No.’s 2-4 seeds at all locations, again using the final national team rankings as a guide to determine draft order.

Opening round contests at each location pit the No. 1 (host) seed versus the No. 4 seed, and the No. 2 seed against the No. 3 seed. The two winners advance to the following day’s championship match, while the two losing teams will square off in a consolation match.

Indoor Track and Field: Florida swept the men’s long jump at the Razorback Invitational in Fayetteville, Ark. Sophomore Grant Holloway and senior KeAndre Bates, the reigning indoor national champion, were the Gators’ 1-2 punch in the long jump. Holloway took the win with a top mark of 7.97 meters (26 feet, 1.75 inches) and passed his final two attempts. Bates placed second at 7.88 meters (25 feet, 10.25 inches)—which came on his sixth and final jump of the evening. 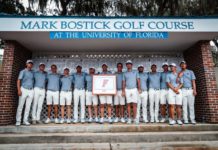