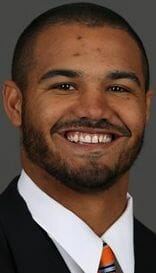 New Florida football coach Dan Mullen inched closer to filling out his coaching staff with another hire Friday, his third in three days.

The latest to join the staff is 27-year-old Christian Robinson, who was a graduate assistant on Mullen’s Mississippi State staff this past season. Robinson is expected to coach the UF linebackers, although that is not official yet.

UF, like every other school in the nation, can add a 10th on-field coach after Jan. 9 due to a new NCAA rule.

Robinson played linebacker at Georgia under Grantham, who also was the defensive coordinator with the Bulldogs at the time.

Before joining Mullen at MSU last year, Robinson was a defensive graduate assistant at Ole Miss for two years, mostly working with the defensive line.

Mullen is expected to announce coaching assignments for his assistants when his staff is completed after Jan. 9.