“I was a freshman and was like this really skinny kid,” Snyder said. “Mary kind of looked around and then asked my coach ‘Which one is she again?’ But then she watched some practice and said, ‘Wow, that kid can really hit the ball.’”

After a stellar prep career that included setting school records for kills (2,703), digs (1,851) and service aces (491), Snyder made the long trek to Gainesville.

UF strength and conditioning coach Matt DeLancey was waiting – with a broomstick.

“Here I was working with a broomstick because the bar was too heavy,” Snyder said. “I was so thin and I had never lifted a weight. I don’t think I had ever even done a pushup. I was just a volleyball player.”

Fast forward to 2017 and Snyder is an All-American and a six-rotation player who can still really hit the ball.

Only now she also possesses a jaw-dropping hammer of a jump serve.

She also has 186 digs, second only to senior libero Caroline “CK” Knop’s team-leading 263.

“She is unbelievable,” Knop said. “Carli truly can do it all, and I think she is absolutely invincible. She hits the ball hard, she passes well, and she is a huge leader for us on the court. She’s easy to play next to, and I think that’s one of the best compliments that you can give to somebody.”

“The biggest thing is she has a mental load that she has to carry for our team,” Boos said. “The best is still in front of Carli. This year, she’s really gaining momentum, and we’re looking forward to seeing what she does in December.”

Snyder would like to play overseas following graduation, but already has some ideas on her post-volleyball life.

“I would really love to work in East Africa and possibly help women in a refugee crisis,” she said. “I love to think of myself as someone who could empower women one day. That would be one of my life-long goals.”

Sometimes it just comes down to destiny.

“My Mom is a tennis coach and she came with me on my first visit to UF,” Snyder said. “We flew into Atlanta and then drove to Gainesville. On the way back to Atlanta, my Mom started tearing up, and when I asked her why, she said ‘I just know you’re going to go to Florida. That’s the place you are meant to be.’

“I think I’ve always kind of felt that way, and I’ve always been happy with my decision.”

So has her head coach.

“Carli is really the heart and soul of our team,” Wise said. “Seeing her emerge into the senior that she is with everything in life, not just volleyball, is what makes coaching so rewarding.” 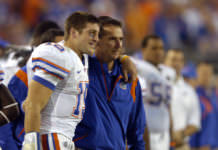 Fact or Fiction: Right time to include Meyer in Ring of Honor at UF? 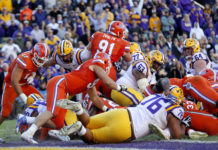 Florida’s 10 best wins of past 10 seasons: No. 1, Gators party in Baton Rouge