Florida sophomore pitcher Kelly Barnhill won the Honda Sports Award, an honor given by the Collegiate Women Sports Awards annually to the nation’s top collegiate female athlete in her sport, for softball.

“I am so honored to receive the Honda Award,” Barnhill said.” There were so many great performances by so many athletes in our sport this year and to be chosen is so amazing. I would not have been able to achieve what I did this season without the guidance and support of my teammates and coaches.”

Barnhill is just the third Florida softball player to earn the prestigious award, as Kelsey Bruder (2011) and Lauren Haeger (2015) are the other two Gators to receive the title. This year she joins fellow Gators Alex McMurtry (Gymnastics) and Belinda Woolcock (Tennis) as 2017 Honda Award recipients.

The award comes on the heels of a successful season for the Gators as the team secured their third-straight Southeastern Conference championship and their fifth trip to the Women’s College World Series championship series.

“What an honor! I’m so proud of Kelly and the work she has put in both on and off the field as well as in the classroom. Receiving this award is another testament to just how hard Kelly and the entire team worked this season,” UF coach Tim Walton said.

Barnhill (26-4, 0.51 ERA) was just .02 shy from the prestigious Elite 90 award, which is given to the student-athlete with the highest cumulative grade point average represented at the finals site for each of the NCAA’s 90 championships. LSU’s Layna Savoie took home the award with a 3.95 GPA in psychology while Barnhill holds a 3.93 GPA in public relations. 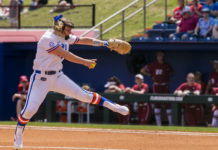 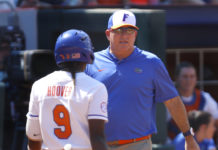