Before Florida’s staff hits the road for summer camp, the Gators will be hosting some of the top high schools from Florida and Georgia.

Southridge will bring UF tight end commit Kemore Gamble, along with two recruits who have offers from the Gators: running back Bentavious Thompson and 2018 wide receiver Mark Pope.

Defensive back Shawn Davis was scheduled to make the trip to Gainesville, but he had to push his visit to June 12.

In addition to the opportunity to scout recruits up close in a competitive setting, several players will be visiting Gainesville and meeting with the coaching staff.

Muir High (Pasadena, Ca.) cornerback Elijah Blades will be making the trip on his own and staying through the weekend.

Did it for the citypic.twitter.com/ZhsBH48jOg

Blades had planned on committing June 12, his birthday, but said he had decided to wait until after his senior season.

Three-star defenstive tackle Jordon Scott gave the Gators his verbal commitment May 24, and he’ll be in Gainesville this weekend. He recently told GatorCountry that the Gators are his “final decision, I’m not that type of guy.”

Dual-threat quarterback Kadarius Toney will be making the trip from Eight Mile, Alabama, to visit the Gators this weekend.

I Will Be In Gainesville This Weekendpic.twitter.com/jpRkkbrjKr 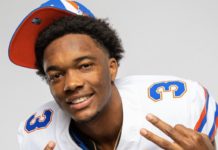 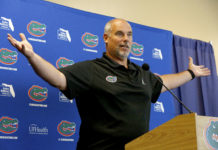