Ever want to hoop it up with Terrell Owens?

Thursday was your chance. T.O. showed up at the Gainesville Health and Fitness Center for a little roundball. A couple of days earlier, he was spotted at Outback eating dinner with Tim Tebow. Not.

Tebow told me he was there and Owens was there, but it was just coincidence.

So what the heck is Owens doing in town?

I called Terry Jackson, who played with Owens in San Francisco, and he said Owens has a friend who lives in Gainesville. Jackson and Owens went to lunch together on Thursday.

I told Terry to have T.O. give me a call if he wanted to do an interview. I’m not optimistic. 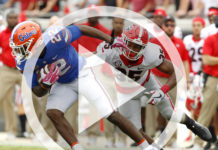