Theo Kelly, a 7-year-old golf lover diagnosed with a brain tumor, signed his letter of intent surrounded by his new teammates at the Mark Bostick Golf Course. The Jacksonville boy will spend the next two years attending matches, hitting a few golf balls at practice and hanging out with the group.

“The least we can do is have you join our team and teach you the game of golf that we love,” said head coach J.C. Deacon.

Theo shyly smiled and carefully signed his name on his “letter of intent” at the news conference. His mother, Chase, said the boy has been practicing his swing since he first met the team last month.

“He’s never played golf before, but he’s not a contact sport type of guy,” Chase said. “He’s been asking me every single day to come here.”

Theo was matched with the UF team last month through a joint effort between the nonprofits Team IMPACT and Golf Fights Cancer. Deacon said the team threw a golf tournament fundraiser, and was looking for a humanitarian way to spend the earned cash. The group opened up a spot for someone in Team IMPACT, that pairs chronically ill children with college sport teams.

In 2018, Theo was diagnosed with optic nerve glioma, a condition that typically affects children and can result in vision loss.

It hasn’t slowed Theo much, his mother said. For the past month, she said, he’s preferred swinging golf clubs with the guys than playing Xbox.

After signing his letter, Theo took to UF’s home course and began driving golf balls on the first hole, with the team cheering and clapping behind him after each swing.

“I’ve never had more fun on the back of that range than the last time you were down here,” senior Gordon Neale told Theo. “You brought a joy to us I haven’t experienced since I’ve been on this team.”

Deacon said Theo is welcome to the join the team any time he wishes, adding that the boy seems comfortable with the team.

“It’s fun to see him so happy and excited, and practicing with the guys,” he said. 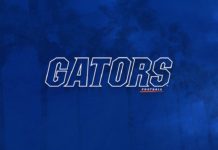