Scott Stricklin has been the Florida athletic director for 27 months, so his feet are plenty wet in his job. In addition to pushing for better facilities and making a big coaching change in football, Stricklin last season was a member of the College Football Playoff committee. Sun sports columnist Pat Dooley sat down with Stricklin for a conversation about ticket sales, scheduling and all things Gator.

Sun: There was a tax overhaul that went into effect in 2018 that — among other things — eliminated the write-off for contributions tied to the purchase of season tickets. What impact have you seen from this?

Stricklin: Well, 2018 was the first year and a lot of it is still unknown. People are still filing because of last year. There are two components. One is the ability to deduct your booster contribution for tickets has gone away. We’ll see if there is an impact.

Then, there is the excise tax for anyone making more than a million dollars in salary. We have five (football coach Dan Mullen, basketball coach Mike White, defensive coordinator Todd Grantham, baseball coach Kevin O’Sullivan and Stricklin). We’ll probably have over a half million we’ll have to pay for the department.

There has been some impact on the booster fee part. I don’t know that we have a real sense of how significant it is. The other side is people got other tax breaks in other places. I don’t think anyone was coming to Gator games for the tax break. I think it’s still too early to tell.

Sun: How are ticket sales coming for the 2019 season?

Stricklin: Our ticket sales are up. It’s early still, but we’re a couple of months ahead of where we were last season. There’s a lot of momentum that has nothing to do with the tax plan. It has to do with our season last year and our home schedule. I don’t have the numbers right now, but it’s trending well ahead of where it was last year.

Sun: Have you discussed student attendance, the no shows, the late shows?

Stricklin: We’ve had a lot of discussions about it. I don’t know if we have had any solutions yet. I think we won’t really have a legitimate solution until we do some other things in the stadium which will be a couple of years away. I think the reserved seats for students doesn’t incentivize them to get into the stands early. It encourages them to show up late. There’s not incentive for them to show up early.

Sun: Is it not a simple thing to do something about that?

Stricklin: Under the current setup of the stadium on the seat map, there needs to be a way when the student walks into the stadium, this is where I can go. If they just had general admission seats, they’d be walking into reserve seating sections, because the student section is kind of meandering if you go across the seat map. We need a defined student section like we have in basketball. If you come, ‘this lower section right here, first come, first serve. You can sit right here.’ We don’t really have a way to do that under our current configuration of our seating for football.

To come up with that, you’re looking at either fencing in their current thing which doesn’t really work or you’re having to relocate season ticket holders to locate students somewhere where you can do that. That’s not an easy fix. I think we’ll get there, but it won’t be overnight.

Sun: Do you ever think about putting them in the south end zone and putting season ticket holders in better seats?

Stricklin: We definitely have looked at that. That’s one of the things that has some potential. There’s an expense that goes along with that. For one thing you want to give the people a reward for season ticket holders and give them more room. That’s one of things we want to do is expand seat width for season ticket holders and put chair backs in where we can. We’d rather do that at one time rather than piecemeal.

Sun: At one point you said it might be 10 years before those kind of things take place. Is it still that far away?

Stricklin: I don’t think 10 years. I think we can do it in less time than that.

Hopefully less than five. I think there’s some things we can do within the seating bowl itself in a short time frame.

Sun: And that would reduce seating capacity. Do you have a number on that in mind?

And I think student seating, we probably have a couple of thousand there. We could get to 80,000 real quick right there and wouldn’t impact anybody coming to the game. You haven’t touched supply and demand at that point. So if you wanted to tighten up supply and demand to make supply and demand more valuable probably between 75 (thousand) and 80. Hopefully we have a great year selling season tickets this year and we reassess that number, but based on where we’ve been the last three or four years that’s probably the number you’re looking at.

Sun: Within less than five years?

Stricklin: I think it needs to happen.

Sun: In this plan, would all the seats be chair backs?

Stricklin: You can’t fit chair backs in a lot of spaces especially as you go to the upper areas. The only way to correct that is to tear down the structure and we don’t have an appetite for that.

There’s a way you can do something on the lower 30 rows or so and that’s what we’re looking at. Put chair backs in and where you don’t put chair backs in you expand seat width to benefit others.

We have an opportunity to provide a better experience with just seat width alone. There’s enough evidence out there that fans have a different expectation of comfort and we have to be mindful of that.

Sun: There was a lot written about UCF and that school wanting a home-and-home series. And it got pretty ugly. Did that stuff bother you?

Stricklin: I don’t think it was fair for either school the way it came out. It’s just part of it. I’m asked a question and (UCF athletic director) Danny (White) is trying to respond to what I say and it took on a life of its own.

Sun: Would you do home and home with a Power Five school?

Stricklin: Yeah. It’s hard to do because of Georgia and FSU on our schedule.

Our schedule is unique. We have unique challenges. We’ve had some conversations, but the problem is people are scheduled out well into the next decade. And because we play an SEC schedule and FSU every year you have to be really strategic as to who it’s going to be. It’s not going to be a team that’s competing for a national title year in and year our. I’d rather play those teams in the playoff.

But I do think there are opportunities to play a team that makes your home schedule more interesting and then when you have to go on the road making it a place our fans might want to travel to. This is all about bringing more value to your schedule.

The 2-for-1 with USF I think was an attempt to do that even though that’s a Group of Five school. I think that’s a more interesting non-conference game than what some of the others are.

Whatever you can do to make it more attractive and at same time — year in and year out — we play one of the toughest schedules in the country and we want to make sure our team is challenged, but at the same time gives it the best chance to win a championship.

Sun: Did you enjoy being on the CFP committee this season?

Stricklin: It was a fun experience. The people in that room really take that role seriously. Watched a lot of football and tried to make sure we were fair to all the teams.

The critics want to take out one part of a team’s resume and point to that as the reason why they should or shouldn’t be where they are. We spend a lot of time looking at the entire schedule. It’s been rewarding work.

It’s frustrating any time people want to assume intent. In that room, the integrity piece is really important, doing what’s right and not because of the conference you represent or what’s best for your own school. Doing what’s fair for the teams under consideration.

Stricklin: Not on the nine games. Since the playoffs started, of the 20 playoff spots 11 have been filled by teams that play eight conference games. That’s been a pretty good model.

But we need to find a way as a league to provide more variety in our SEC schedule. It goes back to what I was talking about earlier — creating more value and interest in what you’re asking your season ticket holders to support.

I’m open for suggestions, but in a two-year period with eight home conference games every two years, seven of those eight are the same. There needs to be more rotation. Some annual games would have to go away, but there are some other great games that will come on the schedule. Auburn-Florida is a good example. We used to play every year.

Our league has so many great brands, you’re going to pick up great games. I think it’s going to be more compelling. You probably get rid of the permanent (opponents). I’m in favor of having the conversation. I don’t know what my colleagues think.

I’m sensitive to the tradition piece, but we have to do what’s best for the whole league and I don’t think we can walk on eggshells around one or two games. You think about players who are here four or five years and never see some teams.

Sun: Now that you have been around it for a couple of years, what are your thoughts on Florida-Georgia in Jacksonville?

Stricklin: Jacksonville is really unique and special. It’s something not many schools have. It would be nice to have Georgia on our campus and go to their’s, but we have to weigh that against what Jacksonville means to that series. It’s pretty important now. But you never say never.

Sun: Is there one thing that has been a surprise to you in your time here at Florida?

Stricklin: I don’t know if there’s anything that’s been a big surprise. I’m reminded daily what a special place Florida is. There is an outside perception that — because the Gators won so much in football under Steve Spurrier and Urban Meyer — any time they weren’t winning there is this angry mob of a fan base.

I haven’t found that. I think the fan base is incredibly supportive. That’s probably the biggest misnomer from the outside.

Gators are really good people. That’s been a pleasant surprise. 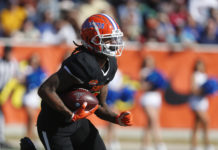